The Wilds of Burnt Cape and Vikings!

Thursday morning was overcast and windy, a perfect day to hike and avoid black flies! A few miles up the narrow peninsula we camped on, at the northernmost tip was Burnt Cape Ecological Reserve. Because of budget cuts they were no longer offering guided tours, but after checking the website and finding a few comments on TripAdvisor, we thought we could find the preserve and hike it on our own.

Most of the preserves don't have signage. You have to find the gravel road in and figure it out from there. We drove to the town of Raleigh, named after Raleigh, North Carolina, after a resident visited there, and convinced the town to change their name from Ha Ha, which is a French name for a type of fence. Traveling around the harbor and across a narrow spit, we reached a rocky peninsula. We actually found a sign telling us we had found it with a map showing a road into the preserve that ended in a parking lot close to the end, with a trail from there to the coastal cliffs. One look convinced us that our RV wasn't suitable for the rough road, so we parked it and started the 3 km hike on the gravel road to the other end.

Burnt Cape has been preserved because it is a sub-arctic barren that contains some important geology and plant life. It contains plants who have their most northerly reach there, and others who come as far south in there range there. Ten or so plants are very rare, and one has been found nowhere else on earth. It is very barren and windswept. The peninsula is about 3-4 km long and 1 km wide, so when you reach the top of the ridge you can see out to sea and across the Strait of Belle Isle towards Labrador. The plant life is mostly stunted, and to help it survive they ask you not to leave the trails. They also warn you to look out for polar bears if you are there in late spring or early summer. They can come across the ice floes from Labrador!


We followed the road to the parking lot and then tried to descend the cliffs to see the sea caves, but we couldn't find a way down, except straight down, with no way up again! There was a small trail out along the cliff top to the end of the peninsula. It gradually descended, so we walked out the path and found ourselves on large limestone shelves along the water. By the time we had reached the parking lot, the sun was breaking through a bit. When we reached the end of the trail, we looked west and it looked like a rain squall was coming, so we pushed back up the road to avoid getting rained on. There was no place to take shelter on the barren hills.


We avoided the rain, it blew elsewhere, and we reached the rig ready for lunch. We drove to St. Lunaire on the way to L'Anse aux Meadows, and stopped at the The Daily Catch. They had advertised traditional Newfoundland food. Greg got...wait for it...fish and chips!!! I couldn't find anything traditional on the menu, so it was fried chicken and chips (french fries) again. We did split a piece of partridgeberry pie for dessert. Partridgeberries are also known as lingonberries in Sweden and one of the many berries picked wild by most Newfoundlanders. Cars park on the narrow shoulders of the roads and you can see people way off in the distance with their white plastic buckets, picking berries. The pie was good, especially with the ice cream on it!

We continued out to L'Ans aux Meadows, a UNESCO World Heritage Site, which is on the northernmost tip of the next small peninsula east of Burnt Cape. There, around 1000 AD, Lief Erickson brought a group of Iceland and Greenland settlers to Vinland and became the first Europeans to set foot on North America. During the 1960's explorer Helge Ingstad and his archeologist wife Anne Stine Ingstad, following clues from the Icelandic Sagas, found what the locals thought was an ancient aboriginal settlement. Upon excavating it they discovered the remnants of the sod and timber houses, and various artifacts that proved beyond a doubt that the Vikings were here before all the other explorers. Parks Canada has reconstructed several sod houses and have reinactors posted there. Nearby you can see the mounded edges of the sod foundations of the original lodges and forge.


It was a beautiful windswept location with several large offshore islands, and a gravel beach perfect for pulling up their boats. From here they sailed south to other areas of Maritime Canada, especially Nova Scotia where they harvested grapes, which do not grow on Newfoundland. Thus we get the name Vinland (for an area that includes parts of Nova Scotia, PEI, and New Brunswick), even though Newfoundland has no “Vin”. The settlement was difficult to keep going year round, so after the initial settling was probably only used as a stopover for reprovisioning between voyages. 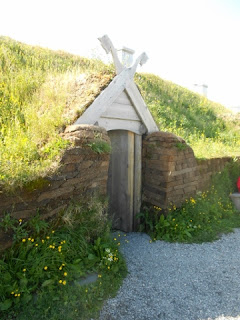 We walked the boardwalk over the boggy area to see the settlement. Just as we set out a mother and baby moose were spotted a ways off through the alder brush. We only saw them briefly and from far off, but they were the first moose we've seen since we arrived on July 10th.

We tried to get into Viking RV Park. No luck without a reservation, so we drove back to Pistolet Bay Provincial Park and were able to get the same site back that we had the night before. Ahhh, another quiet evening in the spruce barrens!

Your comments encourage me to keep posting!

Kathleen and Greg
Maryland
In November of 2012 we sold the house, let go of most of our possessions, Greg quit his job and we left on an extended sabbatical to travel North America. Our home is a 2008 Winnebago View, 24' of RV that provides the roof over our heads. With no set itinerary we are following the whims of the open road. We love the wild places of beauty and solitude. We especially enjoy sharing our geologic discoveries, and Greg, the resident geologist, enjoys sharing his knowledge with our readers. Boondocking, or dry camping is our preferred way to travel. We've found some great places to be alone in nature and soak up the beauty. Come along!